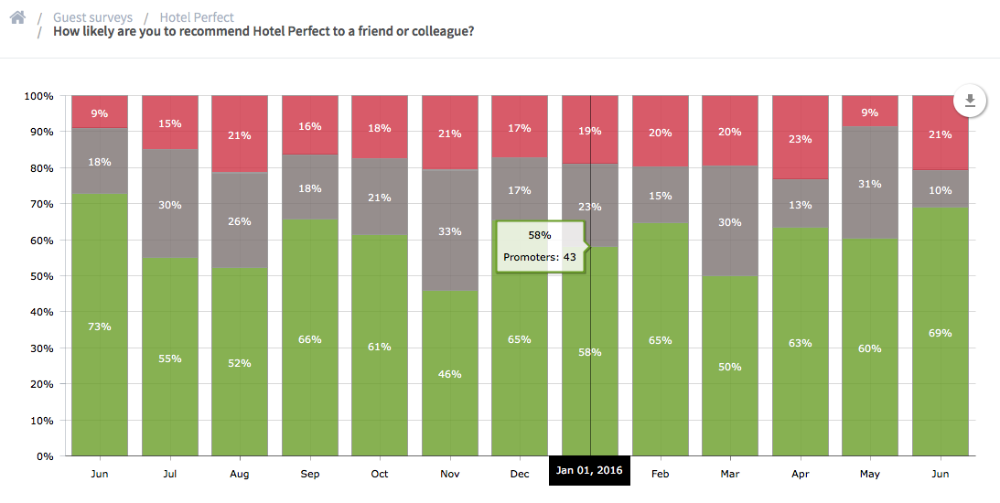 NPS is a  widely used measure of firm performance, often regarded as the most important measure to include in any customer survey. Specifically, NPS measures the concept of customer loyalty, which is likely to impact firm performance via word-of-mouth. Harvard scholar Frederick F. Reichheld depicted this relationship with the following figures.

The above figures show the positive correlation between firm growth and firm NPS. In other words, firms with greater net promoter scores (X-axis) experience higher rates of growth (Y-axis).

HOW IS NPS MEASURED?

NPS asks hotel guests “How likely are you to recommend [Hotel A] to a friend or colleague?”. Responses to this question are measured on an  11-point likert scale, ranging from 10 to 0, where 10 is labelled “Extremely Likely” and 0 “Extremely Unlikely”.

HOW IS NPS CALCULATED?

HOW IS NPS USED?

As an internal benchmark, scores can be compared over time, to indicate how an individual hotel is performing compared to itself. If extraneous variables are controlled, managers can see how their operational changes are impacting guests. 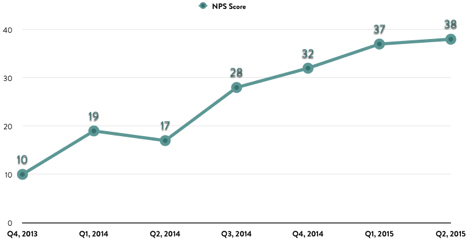 As an external benchmark, scores between hotels can be compared at one point in time and over time. This provides an indication of relative performance among sister and/or peer hotels, in other words, compared to the market.

ONCE WE HAVE THE DATA, WHAT DO WE DO WITH NPS?

Analysis of NPS provides valuable insights that can be actioned by management. Here are a few examples:

Some common questions might be around the scale direction and the labels at each end of the scale. Firstly, in some cases there is left-bias when measuring social science concepts with scales. However, this is either very minor or not statistically significant. NPS scales exist in both directions. We use from highest to lowest because it’s consistent with the rest of our surveys and has a negligible impact. Further, the way NPS is calculated (top 2 box), scale direction is even less likely to have any statistically significant impact.